All Hail the Baby Whisperer!!!

August 21, 2011
Joes Barbell
Uncategorized
Comments Off on All Hail the Baby Whisperer!!!


It’s been slow going in bloggerville for this guy as I have been trying to break some bad habits that have begun to form in the DDC. Eliza and I have been working hard to develop good sleeping skills with Mason. We seemed to be headed in the wrong direction as Mason was not napping, not sleeping through the night, and having the worst time getting himself wound down for nap time. To get back on track we consulted Tracey Hogg. All hail the Baby Whisperer people. I have discussed the awesomeness of this book a few times and yet again have put Tracy Hogg’s good advice into good practice. 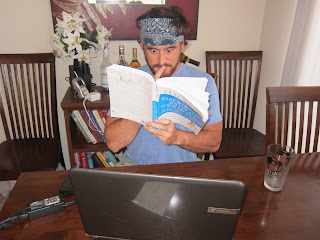 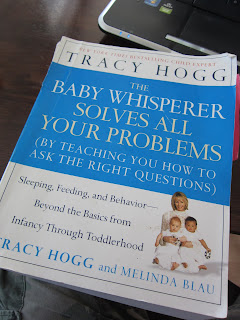 So what was the fix? Step one was simple. First and foremost Eliza and I had to start to pay a little more attention to Mason. Not that we were ignoring him but we weren’t seeing the signs that it was nap time. By the way when I say we, I mean me. Sometimes it’s an eye rub.  Other times it’s a yawn.  Here and there it’ll will be a cracky disposition.  What’s important is to catch that sign before it’s too late; before baby is so tried he can’t sleep. For me that meant watching less of “The Herd” each morning and more of Mason. The more I watched the more I noticed a pattern. Whatever time he ate, about an hour hour and a half later he would start rubbing his eyes and maybe even yawn.

Step two took a little more work. Eliza and I put to use what Tracy calls Pick Up/Put Down (P.U/P.D.). The method is just like it sounds. You put baby in the crib, when he cries (and in the beginning there will be crying) you go in the room and attempt to comfort him with your voice (in the beginning it won’t comfort him), and then pick him up if he continues to cry (which he will). The trick is that as soon as he stops crying you have to put him down. Even if he starts to cry before he is on the mattress you have to put him down. Then you repeat, starting with comforting him with your voice.  As you continue to do this your voice and touch begin to sooth the baby and show him that its nap time.

The hard part is that you are transitioning your baby to sleeping without props; eating, swinging, rocking, etc. For me this was tough because I realized that each time Mason napped during a walk, on a car ride, or in his swing I was messing up his ability to put himself to sleep. What was making my life easy was screwing up little mans sleep time. With the problem targeted I had to change the way I handled Mason. For a little while I had to sideline our morning walks and get Mason sleeping in the crib. At first this was not fun. There was about a week of crying fits. It was just like Tracy discussed. I was trying to change the usual way I put Mason to sleep. He hated it, I hated it and Eliza hated me making are little soldier cry.

Another issue was that we weren’t setting the stage for good sleep. As much as we love our apartment it is not the greatest place to catch a nap. Every room has a wall of windows that stretch from the floor to the ceiling. During the day we are reminded by the sun just how close Hawaii is to the equator. At night the city lights remind us how peaceful we slept in rural NC. The fix there was a good set of black out curtains. The other thing we had to fix was this great mobile in Mason’s crib. He loves this thing and every time we put him under it he’d get all excited. So much so that he could sleep. It’s like trying to fall asleep watching TV.  Just when you think your about to pass out something awesome is on (Jersey Housewives, Kitchen Ninja infomercial, Sportscenter).

So, after about 10 days of hard work and some small changes around the house Mason is napping regularly and every night is asleep in his crib by 7:30.  Not to mention the blackout curtains are helping me get a few more Z’s. Was it easy? Heck No!  Is the work over?  Of course not!  But for now Mason is getting his naps and Daddy had enough time to tell you about it. If you are about to have baby and don’t have a clue what you are getting into I’d pick up this book; it’s done wonders for us.