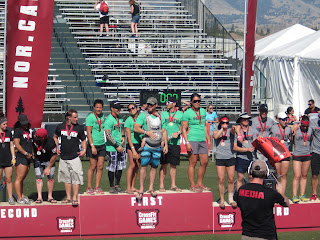 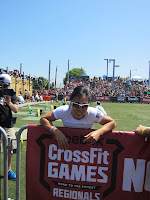 I mentioned this in an earlier post but need to take some time and embellish on a point; Team Crossfit 808 would not be the 2012 NorCal Champs without her influence.  First and for most she brought us together.  There is no doubt that the people who know Crossfit walk into Crossfit 808 looking to meet Elyse.  Once they meet her they want to train with her.  Once they see her train they want to be like her.  At least that’s how it went for me.  Elyse has the “Get it factor” and it rubbed off on the whole team the weeks before the NorCal Regional and during.  At some point during the weekend each member was called to go above and beyond and lift the group.  For me this came in the form of Snatching a 100lb dumbbell with my left hand.  Three weeks before the Regional iT wasn’t happening.  At the regional my effort was good enough to get our team a 3rd place finish.  Amazingly each member of our team has a similar story and answered the call.  I don’t know what went through the other members minds when it was their turn, but for me, I thought what would Elyse do.  Inevitability, my answer was to embrace the suck and kick ass.  I can’t say it enough; thanks Elyse, for everything. 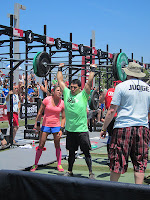 If you know Coach Josh or have seen him train you know he doesn’t have huge or glaring weaknesses.  His movement proficiency is second to none.  If you ask me he is probably our team’s most skilled and technically sound athlete.  Again, I go back to my issues with that 100lb dumbbell.  I really didn’t turn the corner and stick it hard with my left hand until I watched Josh do it and realize that I was doing it wrong.  He probably doesn’t want this credit or believe that he deserves it but without him there are things I just wouldn’t be good at, one of which is CrossFit. Josh goes about his business in a humble manner and is easy to root for, not to mention after a few drinks is not a bad dancer or rapper.  My favorite moment for Josh during the NorCal Regional was when he hit his 215 Snatch.  The weeks leading up he just couldn’t find his PR.  When he did hit it on the big stage he let out some emotion and even threw out a fist pump.  My hope for Josh leading up to the games is that he taps into that emotion more often and isn’t afraid to be a peacock! 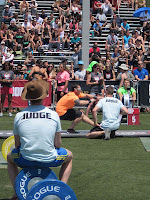 I tease him with this nick name because during his interview with HQ he used the word perfectly and I’m genuinely jealous that he thought to use it before I did.  Mike was my car mate and driver for the weekend.  I think it was fate that put us in that durango (or PJ doing us a favor but whose counting).  The entire weekend Mike and I were equally obsessed with Café Americano’s, being early, putting our voodoo bands to good use, and proving a F**King point, that Team 808 wasn’t going to be a flash in the pan or one wod wonder.  As a team each member will inevitably have certain skills.  In my opinion Mike possess the most absolute strength.  He can push, pull, and squat the biggest numbers.  Much to his chagrin he was asked to prove this in WOD #4.  He didn’t disappoint.  Because he stepped up and took on the ugliest WOD with Coach Josh I didn’t have to, which left me with fresh legs to hit Sunday hard.  It was awesome getting to know Mike and Veronica (Mike’s very funny wife) a little better over the weekend as we traveled to and from the games. 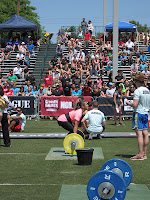 From the beginning of training I teased Katrina for always looking the most put together.  Who has hair ties, socks, and shoe laces that match?  Katrina does, and many options to boot.  Katrina was asked to step up and perform on a huge stage.  She did it.  In WOD #2 she rowed fast, pistoled flawlessly, and strung her heavy hang cleans together.  In WOD #4 she butterflied her pull ups and gave Kyla a shot to smash the shoulder to overheads.  In WOD #6 she carried the team and a 70lb dumbbell the furthest she has in 6 weeks; then proceeded to hit a final muscle up under the cap to ensure that team 808 would hold onto the number one overall spot.  She attacked the weekend with an enthusiasm and innocence that only comes with first time experiences.  I was actually jealous of Katrina all weekend because in my eyes she seemed to be enjoying each moment more than any of us.  I hope by the end of the weekend she realized she deserved to be where she was and that our team couldn’t have got where it did without her efforts. 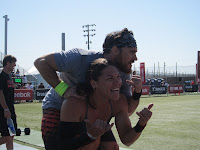 Brandy is team 808’s most physically imposing figure; hence the nick name (so imposing in fact that I have never used this nick name or any while in her presence).  Fact is she may be the nicest person on our team.  It was no doubt that she could handle the heavy cleans, throw a dumbbell around, and snatch as much as she wanted to (by the way Brandy muscle snatching your body weight only makes the rest of us look weak.  You are an animal and I love it.).  For me they way she hit her pistols during WOD #2 was awesome.  Leading up to the games I had my doubts but she didn’t disappoint.  My favorite moment during the games was after WOD #3 when she picked me up and carried me to our waiting fans.  It was also pretty cool to steal a kiss ; ).  By far my favorite moment of the weekend was during the Sunday night after party and cheat fest when Brandy lost control of her speaking voice and began to speak like Miny Mouse.  Brandy, thanks for being an awesome person. 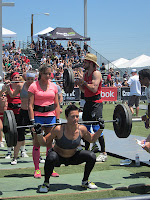 Kyla will never admit it but she is a beast.  She could have done any of the 6 WOD’s and been a stand out; Fact!!!  She probably could have made a run as an individual competitor but was on board to sell out for the team from jump.  She isn’t afraid to go to an ugly place during a WOD and find a way to finish hard.  I’m pretty sure her back and knee were hurting a little more than she admitted as the weekend went on.  Fact is she gutted through it and did exactly what she said she would, sell her soul and finish.  WOD gifts aside she is also a pretty good person.  She is always the first to assist with the babies, throw out a word of encouragement, or laugh at a poorly timed and awkward joke, something I’m guilty of day in and day out.  If team 808 makes noise during the next step in our journey it will be because she hit beast mode; which I haven’t seen not happen since the first day I walked into Crossfit 808.

Our Family (The Real Team Crossfit 808) 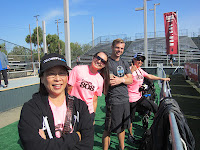 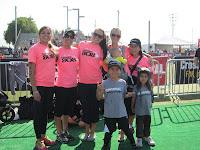 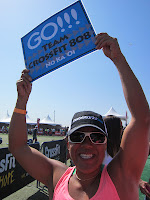 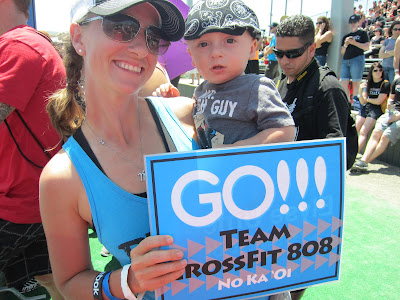 Facts are that 90% of crossfitters will never get to compete on a stage like the one Crossfit 808 was fortunate enough to compete on this past weekend.  Fact #2; more non-competitive members from Crossfit 808 jumped on a plane, crossed the pacific, and supported the team than did some crossfitters from gyms in the Northern California area.  Around January I wrote down some personal goals.  One of which was to snatch 225 pounds.  If you followed the games you know that I hit a PR this weekend by Snatching 255, well above what I thought would be a life time achievement (which is now currently set at a plump 275).  What the videos and pics floating around don’t show is what I saw as I stepped up to the 245 and 255 platforms.  There was a sea of neon pink shirts and the sounds of friends and family, not to mention Jeff King’s voice screaming to be epic.  Never in my wildest dreams did I ever think that I could throw that kind of weight over my head in one movement.  Currently there is no doubt in my mind that if the 265 platform was situated in front of the 808 fans I’d have punched a bigger whole in the sky and stood tall once more.  Facts are that as a team we leaned on those present for support.  Thanks for the cheers, the rock sauce, the aloe, the help with Mason, the pictures, the pats on the back, and just for being there.  The next step in our Journey will only be as sweet if you provide the same back drop.  Thank you Crossfit 808 for believing in us.

This is only the beginning of my NorCal Review.  If you like this post share it.  We need to drum up support for the Games and it starts with celebrating this past weekends accomplishments.  Lets all make sure we keep this momentum going and ensure that we hit Carson running and give ourselves the best possible chance to compete and leave with no regrets.

That was an awesome read, Joe! Very well said about each member of Team 808 and family. You're right, need to keep the momentum going, and continue to strive to reach higher heights and goals as a team. Looking forward to cheering on Team 808 at the Crossfit Games in July.

I'm so glad you did this! I wasn't there and it's interesting to see the games from your perspective. I am really astounded at what this team has accomplished! And I'm constantly amazed at how humble, friendly, and accessible everyone is. I stopped by the gym yesterday and it was 'buisness as usual'. How can that be when you stood on that podium as #1? You guys ROCK! Truely inspiring!

It'll be awesome to have you cheering us on… be even better of you left those sweet plates in the gym for us to slam around.

I loved every minute of the past weekend and just wanted to share with everyone what I was feeling. The games are nice but changing the lives of our clients at the box comes first. Everyday is like the games watching you guys achieve day in and day out! That's why its always biz and us at 808.

Those plates will be coming back to the box when Elyse let me know that she want the team to start working with those plates again. I thought that it was good for you guys to get use to the feel of those plates, and to visually prepare by their color.