Joe’s NorCal Regional Review:Part 2, My PR – In Snatching and Peacocking

May 24, 2012
Joes Barbell
Uncategorized
Comments Off on Joe’s NorCal Regional Review:Part 2, My PR – In Snatching and Peacocking 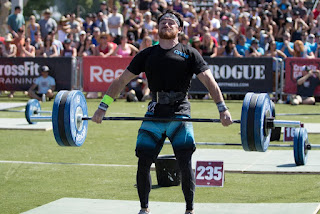 Since being home Eliza has asked me what single moment I’m most proud of from this past weekend.  Easy, PR’ing my snatch in front of the entire Crossfit Community, under a time cap, when it mattered most.  It’s no big deal to me that most of the crowd was watching the animal from TJ’s gym finish the ladder and proceed to rep out 295.  I was doing my best to keep up with him and do a few extra fist pumps.  Beside, after watching the video Eliza shot it’s clear that the important people were watching and cheering for me (Jeff King you are the man).  Not to mention, all his extra reps got him was a seat on the couch come this July.

I am fortunate enough to have a kick ass wife who caught a bunch of my heavy lifts during WOD #5.  Plus the maniacs at Gymnastics WOD also thought enough of me to look my way as I reached the heavy section of the ladder.  What’s really cool is that I was bitching a few days ago, actually two Sundays ago when I hit 245 the first time, that my snatch PR’s are like the Dodo Bird, hard to catch.  My last two hits, 235 and 245, have both escaped the watchful lens of the eye in the sky.  So, in case you were wondering if I really had it in me to move weight fast, here are a few examples.

You’ll notice that my temperature raises the heavier the weight gets.  If you want to see the entire celebration and the double shocka I tried to kill the crowd with check out VA Loans Video.  The truth is that over the last few months my oly. lifting has been as much about attitude as technique.  I’ve been getting angrier and angrier at the weights, finishing with a little more passion, and thriving on the emotional swings that are accompanied by attempting PR’s week in and week out.  While coaching I talk a lot about finding a little pop and swagger in your oly. lifts.  For me watching the videos of the boys and girls at California Strength just gets my blood boiling.  Check’em out if you’re looking for a lifting muse.  Maybe they aren’t your style.  Maybe you don’t get all worked up to toss weight.  And, maybe that’s why you aren’t hitting PR’s.  Find something that gets you fired up to lift and you will get better, fact!  Actually, that’s only the truth if you put in the time, effort, and have the support to make the necessary sacrifices (thanks eliza and the entire 808 community).

Two weeks before last weekend’s NorCal Regional, when I hit 245, I put it in my head that I was going to PR at 255 on the big stage and put on a show.  My only regret is that I didn’t aim high enough.  I watch the video of my 265 miss and know that if I had put that number in my head I would have hit it as well and had the stage to myself at 275.  I know in the grand scheme of things my numbers aren’t huge.  But for a guy who doesn’t train oly. lifts exclusively or even have an oly. coach I’m happily surprised and impressed by the movement I have made with my clean and jerk and snatch this year.  This is partly due to the Criminal’s influence and the rest of the support at CrossFit 808.  Not to mention injecting a little attitude into my lifting.  Slam bars, get aggressive, embrace the moment and shoot for the star’s people.  And, when you get there don’t be afraid to be bigger than the moment.

For you viewing pleasure the pics of my huge snatch taken by the awesome people at Gymnastics WOD and video of a few heavy and intense moments during WOD#5.  I haven’t throw fist pumps like this since putting people on their asses while playing football in high school and college.  There is no feeling like physically dominating your peers on the playing field.  Maybe that’s why Snatching and Clean and Jerking get’s me going.  Since I can’t slam bodies anymore barbells serve as a close second.

Remember to share with your friends and help the squad over at 808 drum up some support.  This party is just getting started.