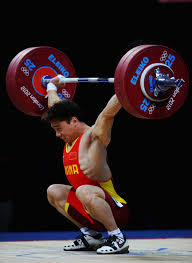 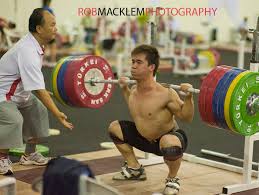 There is a ton of good, bad and ugly content on the inter webs regarding the squat.  I did a quick google search that yielded over 34 million billion results in .476 seconds.  How is someone supposed to determine the applicable material from the futile?  The first thing you have to do is apply some specificity to your search.  Are you training Powerlifting, CrossFit, or are you trying to get stronger for some other sport?  Knowing why you are squatting should help to determine how you should be squatting.

When I teach the squat I do so with the intention of supporting and strengthening the primary movements in Weightlifting; the snatch and clean and jerk.  I recently came across a solid write up at Gentleman and the Meathead that also spoke on this.  In the piece Stop Grinding Your Squats, Adam discusses that Weightlifters should be squatting everyday, but not, wearing themselves down to the point that the primary lifts suffer.  The only real time to GRIND your squats should on a testing day – certainly not every day.

Once you’ve made the decision to become a specialist, “leg days” will be a thing of the past. Completely trashing your legs will take away from volume that could be spent performing the competition lifts and I don’t know if you realized this, but those lifts require your legs.

The piece goes on to discuss volume and SMARTLY monitoring it to always leave a few reps in the tank.  To sum it up if you are Weightlifting you should be hitting 3-5 sets at a moderate load (80%ish) of 1 to 6 reps on any given day.

Where Adam spoke on volume in his piece I wanted to take a moment and discuss technique and applying the principals of CONTROL and TEMPO.  First off, I am not a huge fan of applying percentages, especially with new athletes, those who work full time, and those also participating in other conditioning programs – about 95% of the folks I train.  In my mind humans are flawed creatures and applying a percentage results in too much or too little work being performed, rarely the correct amount.  I like to rely on my eyes and the athletes feel to determine load.  I also teach to my athletes that above all else, when squatting for Weightlifting I don’t care how much is on the bar, as much as how accurately they can demonstrate the concepts of CONTROL and TEMPO.

CONTROL in the squat can be demonstrated best by simply watching the athletes back.  At no point in the decent or accent should the angle of the back change.  Maintaining an upright and vertical torso throughout the lift demonstrates that the legs are taking and moving the load.  I recently had the chance to watch the best Weightlifters in the world during a training session at Worlds.  It was very apparent that they prioritized spinal position over load, speed, or GRINDING.  You’ll notice in the training clip from worlds that not much Grinding is going on and neither is there much change in the shape of Moulaei’s back.  In Weightlifting it is not enough to move load, you must do so with control.

The idea of TEMPO when Weightlifting is always critical.  I want my athletes to be aware of their TEMPO and always aim to finish a movement faster than they start.  To further that point I cue my athletes to build the speed of a movement gradually.  Also, at no point should I or anyone be able to tell where they picked up speed.  The word that most accurately characterizes this concept is smooth.  Coach Burgner of CrossFit Weightlifting is often credited with the line “smooth is fast” and he is right.  Whether you are squatting or snatching abrupt changes in speed do terrible things to your bar path and sense of balance.  Think of stomping your gas pedal down at a red light.  Before moving forward your tires cherp and depending on your horse power your vehicle is hard to control.  Regarding Weightlifting, at no point should a change in speed come at the expense of a loss of positioning or balance.  When I cue this concept of TEMPO while squatting I ask that my athletes stretch to their bottom position and then accelerate out of it.  Again, while at worlds I saw this concept demonstrated by the best in the world.  In the clip below Jiang Huihua demonstrates that even while breaking a world record smooth is fast!

Squatting for the sake of Weightlifting should be treated as a skill and should mimic the primary lifts.  The athlete’s spine should never change shape and they should aim to make the accent faster than the decent.  Without these concepts in place there simply will not be much transfer from squats to lifts.  When I was CrossFitting I mainly utilized the low bar back squat choosing horse power and strength over technique and skill transfer.  During this period I squatted more than I ever have in my life.  However the results did not impact my Weightlifting favorably.  When I adopted squatting mechanics that supported the skill of Weightlifting my squat numbers took a dip but I did eventually set personal records in the Snatch and Clean and Jerk.

The moral of the story is specificity. Just like performing a quality internet search you must practice your squats with a specific goal in mind.   You can’t be all over the map and hope to get where you want to go with any degree of efficiency.  There are also more things to consider when hitting your auxiliary Weightlifting movements than load, sets, and reps.  Take a moment, lighten the load and practice the skill of squatting. Try adopting these principals for a few months (yes months) and let me know what you think.

Thank you Coach Joe! I appreciate your knowledge on this and the skill you bring to educate others. It is great to have the faith in yourself and take one step at a time and know .. yourself better.. ALL TOTALS MATTER!

Hello, I log on to your new stuff named “Practicing the Squat: Applying Control and Tempo – Joe’s Barbell” on a regular basis.