How to Improve your Jerk: A Jerk Balance Variation

December 18, 2015
Joe
Jerk, Technique
Comments Off on How to Improve your Jerk: A Jerk Balance Variation 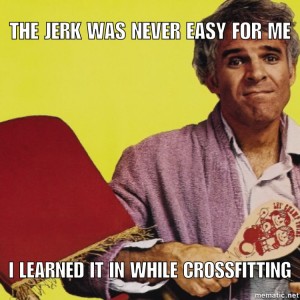 The Jerk is the second portion of the Clean and Jerk. It has some interesting qualities that lend itself to carry the largest loads of the three primary movements in Weightlifting (Snatch, Clean, and Jerk) if taken directly from the rack or blocks.  One being, the Jerk has the shortest range of motion.  Second, the eccentric phase, or dip, allows the athlete to build momentum and utilize stored energy in both the athlete’s legs and the bar.

There are also very common mistakes that many athletes make when learning the Jerk that do keep them from utilizing the movement to its fullest potential.  Not understanding what the movement is ranks at the top of this list.  Most athletes seem to think the Jerk is a press variation, which it is not.  Most other technical mistakes come form not practicing the skills associated with the Jerk.  Skills like getting low and quality footwork.

Watch the most accomplished Weightlifters, especially those at the international level perform the Jerk, and the Snatch and Clean for that matter, and you will notice that they use their legs to move the bar and their arms and hands to move their body.  Where I see the largest detachment regarding the Jerk is the basic understanding that the arms should not be used to press the bar up.  Rather, the legs push the bar up, then the arms should be engaged to press the body under the bar.  Imagine being suspended in your living room with the top of your head touching the ceiling.  If you were to use your arms to drive your body to the floor you would essentially be performing a jerk.  It is my opinion that the best Weightlifters in the world are able to make the transition from using their legs to drive the bar up against the floor to pulling or pushing their body down using the bar with precise timing and accuracy.

To experience the sensation described above, Jerk balance variations have been utilized by many coaches.  Check out the huge library of exercises and drills at Catalyst Athletics for examples.  Some of the variations work from a partial split and focus on developing good habits with the front foot or back foot.  I have also learned full split variations from Coach Burgener while working with CrossFit Weightlifting that teach the full split.  Coach Burgener calls this drill a Tall Jerk, and can also be viewed on the Catalyst Athletics library as a Press to Jerk.

The emphasis in the above variations, and the one described and pictured below, is to help athletes gain experience developing the skill of pressing their body under the bar and establishing good footwork.

In my Jerk balance variation, seen here and below, I ask my athletes to stand tall, take the weight out of their heels, come up slightly to their toes, then press to split aggressively.  Squat variations can also be used.  The tweak most folks notice in my variation is having athletes take their heels off the ground.  I do this to simulate the end of the drive, post dips.  Another place to experience this would be my push to slide drill pictured here.

It is my belief that for athletes to make the transition from going up to going down they need to slow down and teach their body where that transition takes place.  As athletes gain consistency I may load the drill and ask them to press the bar slightly overhead like the Tall Jerk variations linked above.  In terms of sets and reps I wouldn’t over think it. I like to do drill like this at the top or bottom of a session to establish good habits for working sets to follow or fix bad habits that show up during working sets.  I will often prescribe 3 sets of 8-12 reps paired with isolation, trunk, or gymnastic work.

Going back to my original point, about misunderstanding the movement, along with not transitioning to pressing under very well, I also believe that athletes do not spend nearly enough time working on the skills associated Jerking.  This often comes up when learning new movements in competitive settings, which is never a good idea, especially high skill movements like those at the center of Weightlifting.

You will notice by watching the video above that the athlete is unloaded, focused and moving much better than the loaded jerk performed pretty terribly below.

I want folks to take this discrepancy to heart.   Without putting in the proper practice, paying attention to the parts of a movement and understanding why these skills should be practiced you shouldn’t be competing or taking max attempts.  The fact is without a basic understanding or a foundation built on proper technique, not strength, you will never reach your full potential.

For more details regarding the drill described above and others like it be sure to send your questions to joe@joesbarbell.com, message the Joe’s Barbell facebook page, or DM Coach Joe @joesbarbell on Instagram or Twitter.

Tags: How to Improve Your Jerk. Weightlifting Technique, How to Jerk, Joe's barbell, Weigftlifting,