Why Glenn Pendlay’s Beard Should be More than Feared

January 8, 2016
Joe
Commentary
Comments Off on Why Glenn Pendlay’s Beard Should be More than Feared 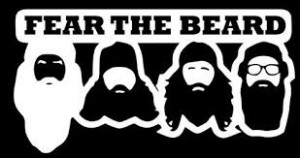 Hippster’s, crossFitter’s and professional men everywhere are dawning beards of all types these days.  Spend a moment walking a public street, hanging in the gym, or sipping a single malt and you’ll notice the prevalence of a bearded men everywhere.  Guys with beards have also been proclaimed King of Instragram , are “manning” big business, and seem to be taking over the world, well at least NYC.

In my own personal life I have also benefited from the beard movement.  Famous characters like Jeremiah Johnson, Rooster Cogburn (Jeff Daniels not John Wayne), and long departed leader of the Spartan 300, King Leonidas, have been portrayed performing fantastic feats of man’ism, each sporting an epic hedge that helped inspire me to work a beard five years ago.

I also wanted to grow a beard to show my wife I was in charge.  Fact is she was not a fan of my face growth.  However, what started as a defiant stance against demasculinization has now become one of her favorite things about me.  To date I have offered to shave my beard 6 times and she has refused each offer!

Aside from flying as flags of masculine persistence, becoming part of pop culture, and even running big business, do beards also serve a higher function?

Are beard’s extensions of our central nervous systems?

Is there proof that a beard will supply a man with the power of Thor?

A blog post recently tossed my way leads to YES!

In the post the author discusses a scenario where Indians, opps, I mean Native Americans, wait, I think the correct term is Indigenous People of the American’s.  Any who, great tractors with a strong “Sixth Sense” were recruited by the military for service during the Vietnam War. Once in the armed forces many of these super human tractors seemed to lose their abilities when given military style haircuts.  The read is certainly interesting, and goes on to explain that hair growth, yes even bearding, may be the central physical piece toward men developing a strong intuition.  The suggestion is that hair growth, and beards, may even serve as extensions or antennas for a man’s central nervous system.

Moral of the story?

There doesn’t seem to be a down side to growing to a beard.  It’s obviously cool, there are millions to be made, ladies to dominate, animals to harvest and wars to be won.  All of which seems to come easier for men with beard.